I cannot believe that I have 101 followers now. That means a lot to me and I thank you. I love doing this blog, sharing the world I see. The weekly challenges have been such fun to do and have helped me to focus my posts a little more – focus on a different way of looking at the pictures I take.

Those of you who have joined since last August or so may not be familiar with the families of my local pond. Our love affair with them began in 2013, the first time we realised how many families grew on this pond. Coots, Canada Geese, Mallards, Tufted Ducks – now we have Moor Hens and Great Herons. But first, always, the Mallards have their families. They were born earlier this week, Sunday or Monday we think. He saw them first and sent me a photo from his iPhone on Tuesday. I saw them today.

To make these small enough to post in my quickly waning last gigabyte of storage here, I’ve had to make these quite small, and I’ve zoomed almost to the limit, so the resolution isn’t what I would have liked. Also, the ducklings’ natural camouflage makes it difficult to focus on them in waters shimmering in the sun. 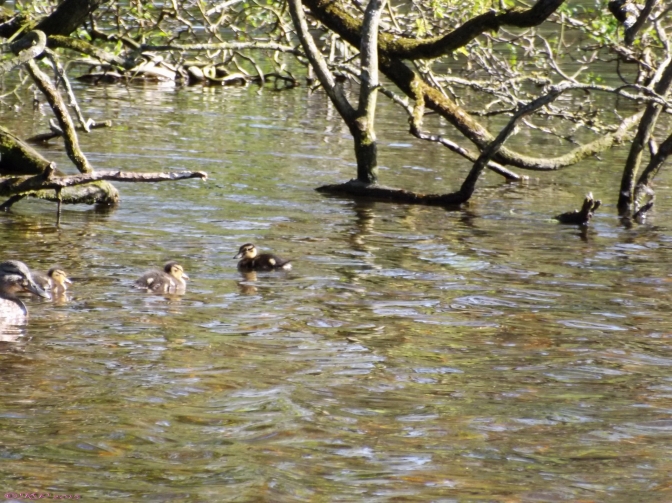 There’s always a maverick, one that goes off in his own direction.

There are 16 that I’ve counted at this point, and two families. We’ve seen both mothers, but so far, only one male Mallard has been hovering nearby.

They are at what I have come to think of as the ‘skittlebug’ stage as when they go really fast, their bodies lift out of the water and they look like they’re running on its surface. As they grow, Mama will teach them how to find food in grass – then, they’ll be in danger from the ravens. We’ll help protect them as best we can and hopefully, most of them will survive. But that’s in the future and right now, they’re safe in the water.

Norton (Papa Goose) has been very protective lately and Trixie (Mama Goose) has been on the nest, not leaving it much. You should hear her scold Norton for beginning to feed without her. Honestly, they have arguments over this. She yells at him from the little island, he turns around, seeded bread in beak and honks back. She climbs off the nest and slides into the water, squawking the entire time; he yells back, neck stretched out over the water. They hiss and splutter at each other until Trixie is within range and we throw her a treat too.

That settles everyone down. We’re keeping our fingers crossed that this year there will be goslings again. But until then, we have our First Families to get to know.

3 thoughts on “That Time of Year”