It’s been a crazy month and I’ve barely been out to see the pond families at all. But I did manage to get a few shots of what’s going on. These are a couple of weeks old.

Spike is almost larger than the Ravens at this point, but after losing the Princess, Norton and Trixie are hyper-vigilant. I watched this Raven move back and forth across the lawn, coming ever closer to the family as it lounged in the sun. Trying to gull Norton into complacence. Norton was having none of it and I could see he was watching every move that Raven made.

A few days later, I managed to get to the pond in late afternoon. The sun burnished everything it touched with gold.

There are many more living around our ponds. I heard this Green Finch before I saw her.

And we have two new additions to our community. A Mistle Thrush and a Song Thrush have both joined us. 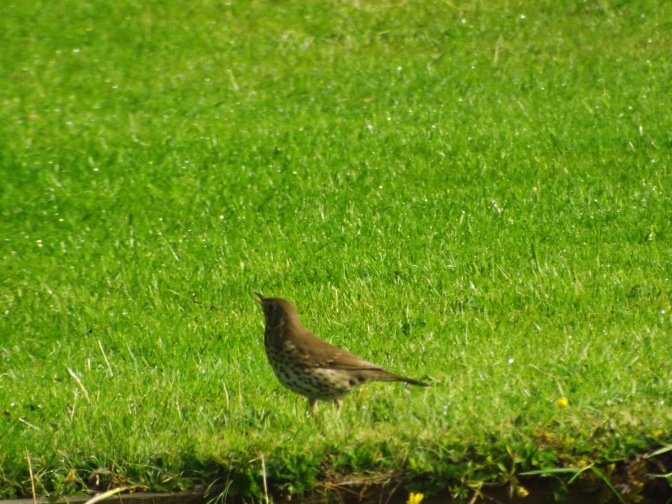 Spike continues to grow and thrive. One day, he figured out he had wings!

And he continued to grow.

This is two weeks ago. His colours had started coming in!

It’s such a privilege to be able to experience this. To watch. He’s tested his wings a few more times over the past week. His flight training has begun. In four or five weeks, he’ll be strong enough, but for now, he’s still earth bound.