Two days after the ceremonies when we went back to visit the Memorial and find our family members on the wall.  Take the pictures we couldn’t take on the day.

I went directly to T K Hall on the wall.  I traced his name with my fingers, then sat on the monument floor and wept for him.  I have gained more of an understanding of the conditions on Vimy Ridge on April 9, 1917, since we last visited.  I wept for the way he must have died, in the sleet, cold and mud, always the mud, bombs and guns firing all around, people dying all around, bodies never found, never identified except here.  On this wall.  On the monument built above their places in the ridge.  I hope he knows somehow that he was cherished and loved, and that he is to this day; that one day, a five-year-old-girl found his picture in the family bible … and that he inspired her for her entire life. 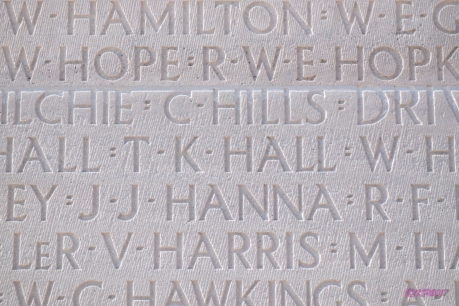 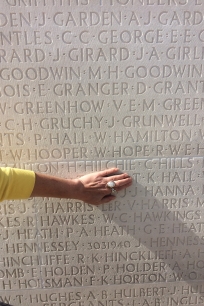 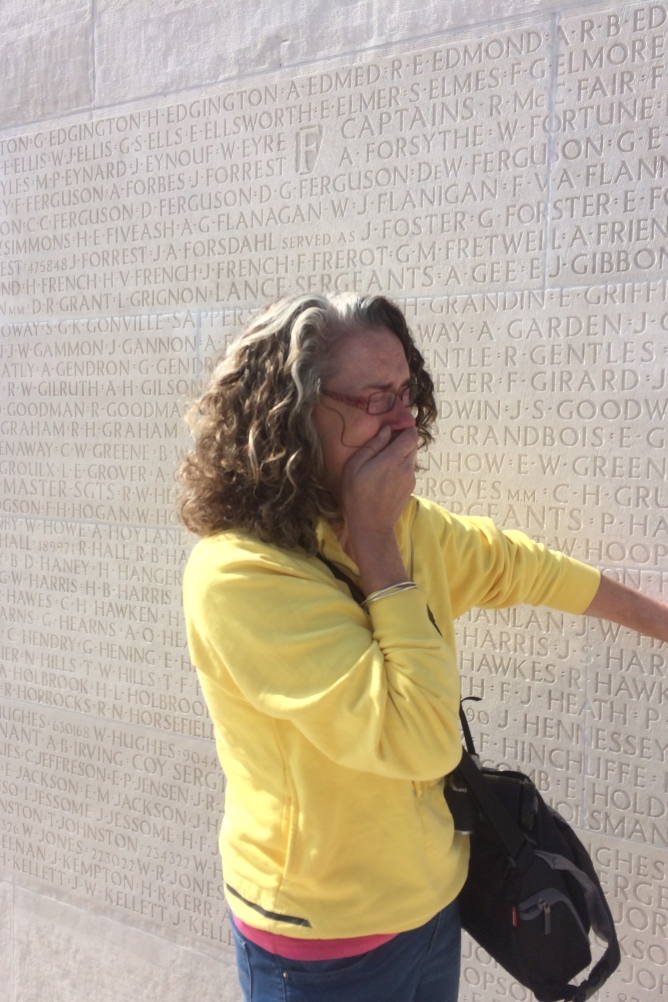 We met a pipe band that day that had been supposed to perform at the ceremonies.  They were delayed due to circumstances utterly out of their control and were barred entry to the site by security for arriving after the mandated time for entry.  As we walked up the avenue from our car, we could hear them.  They had been allowed to come back and they piped us to the Monument.  There we found four beautiful Scottish Dancers performing a Sword Dance and a violinist who played ‘Taps’ so movingly. 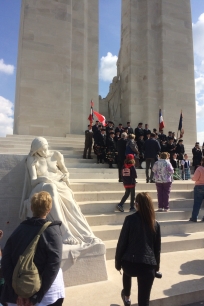 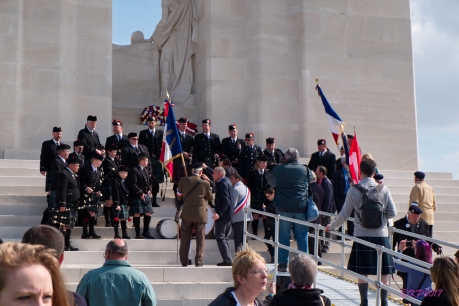 We came to the rescue of one of the pipers, whose phone/ camera had smashed and he wanted a photo of himself in uniform at the monument, which he has duly received.  It was from him and the other pipers that we learned of a miracle:  the Toronto Maple Leafs had made the play-offs.

And of course, I took photographs. 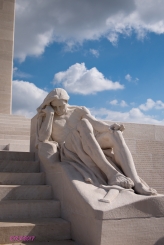 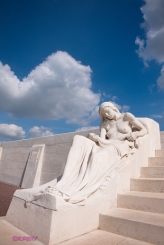 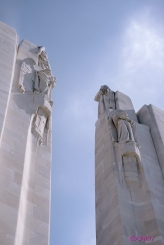 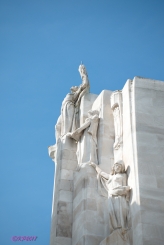 Lifting the Torch of Peace 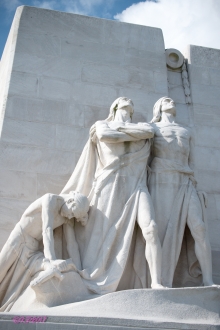 The North Defender – Breaking the Sword 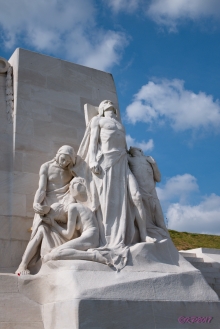 The South Defender – Sympathy of the Canadians for the Helpless 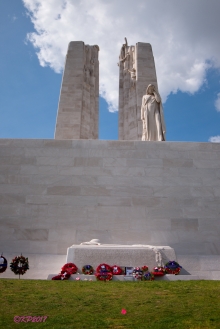 Canada Bereft, flanked by the pillars of Canada and France, weeps over the Sarcophagus. 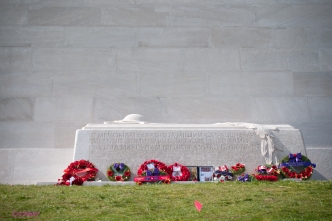 The Sarcophagus at the foot of the Memorial. 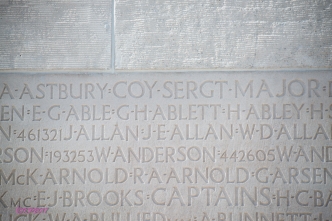 Family on the wall.

We were starting to get a bit hungry, but we wanted to visit the new Visitors Centre to see the tunnels. The new Visitors Centre is very interesting, with displays illustrating what the soldiers might had while living there,  some of the bronze medallions – polished beautifully, books about Vimy Ridge and World War I in general for sale, and cheerful Canadians ready to answer questions and direct you on your way. Really, it was the tunnels, as although we had been able to walk the trenches, the tunnels had been shut on our previous visit. 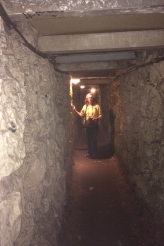 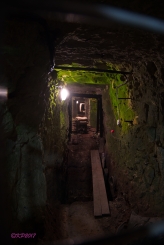 A railway for clearing debris. 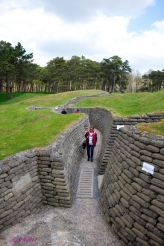 The trenches, lined with bags of chalk. 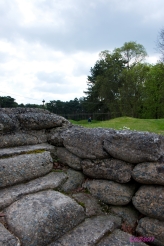 Peaking over toward the German trenches.

There were several stops at which our guides described conditions in the tunnels, how they’d been built, what it must have been like to work in them, live in them, and how important they were to the success of the battle. Over here was where a hospital area might have been, or where the Officers met. Here was a mock-up of the railway devised to help get the chalk out of the tunnels being dug by the Welsh miners. The communications cables might have been strung up similarly to the electrical cables currently running along the walls. The light would have been similar. We were very impressed by this short tour and happy to have done it.

Now were were hungry and it was time to find a restaurant. 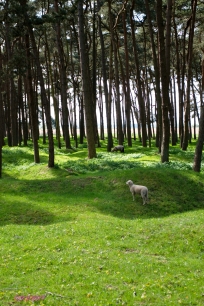 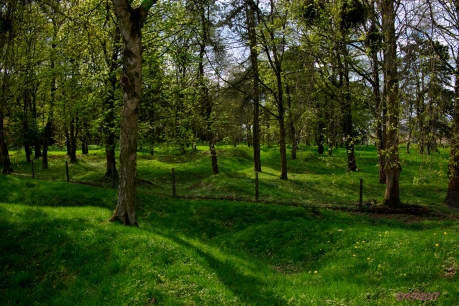 On our way back to the car, we met a father and daughter.  She was perhaps 11 years old and her leg was splinted.  She was on crutches and she was clearly struggling. They lived not far away and it had been important to them that they visit the Memorial during this week of remembrance.  They were told by the Gendarmes that they had to park about a kilometre away, back where we had debarked the shuttles on Sunday.  No quarter for a wounded girl.  It was suggested to Papa by one Gendarme that he could leave his daughter alone near the Memorial while he sought parking.  We told them to stay where they were as our car wasn’t far away and we drove them to the Memorial entrance.

“Je vous aime,” Papa said as the got out of the car at the closest point we could take them to. “Merci.”

We had lunch at the Café d’Erable, the Maple Leaf, on the edge of Givenchy, the first building you come to driving down from the ridge, a short while later. We shared a table with a couple we’d met on the shuttle on Sunday.  Then two more groups of Canadians came in.  And we were among friends.  Talking hockey.

When all is said and done, the emotions invoked in all of us who were there were almost palpable, jubilantly so.  We looked out for each other, we shared memories of men on the wall, we prayed, we celebrated.