Our rickshaw let us off on Place du Carrousel, across a great square from the Arc du Triomphe du Carrousel, the entrance to Jardin des Tuileries (which we didn’t see). On the other side of us was the magnificent Louvre museum. Originally a palace, it has over time stayed much the same as it was hundreds of years ago.

Our first sight after we got off the rickshaw. Through that arch is the Jardin des Tuileries.

A quiet, restful spot where lovers wander and friends chat.

The end of the Denon wing of the museum.

My first view of the Pyramid. It’s actually pretty cool.

We were meeting friends at the entrance. Apparently, there are two entrances. Luckily, they found us!

I honestly never realised how big the Louvre truly is. You read in art class that it was a palace, but it wasn’t until we were inside and had no clue where to go that we understood. The Louvre is an incredible place. In and of itself, the building is a work of art. It is bigger than most villages and every inch is incredible. The one thing we did right was to book tickets in advance. That helps you avoid the extremely long queues that form for admission. I would also suggest going in the morning (we did not) when I hear it is a bit quieter.

Naively, we thought it would be easy to find our way. Get a map, follow signs, and Bob’s your uncle. If any of you ever go to the Louvre, please do not go completely unplanned as we did. We had no clue what to do, where to go or how to find anything. Luckily, I followed my nose and we saw incredible treasures.

The ground floor of the Sully wing holds part of the Greek, Etruscan and Roman collection. I’ve seen photographs of many of the sculptures but there is nothing to prepare one for the impact of the first room we entered. It took my breath away. I’m sorry to be cliché, but there you are. 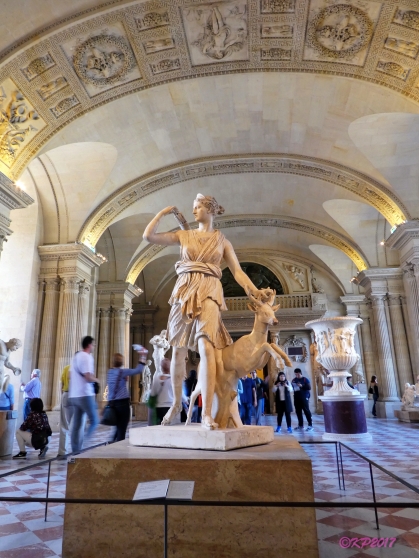 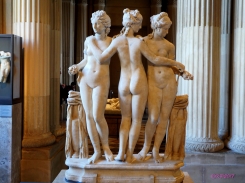 Even the ceilings are works of art. 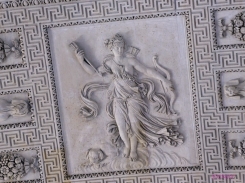 Detail of the ceiling in the Greek, Etruscan and Roman Antiquities room, ground floor, Sully Wing

A rear view of the Centaure. I love the setting.

The further into the room I went, the more moved I became until, looking around me at the light, marble, statuary of incredible perfection, busts bringing one into intimate proximity to a person’s face. Deity upon Deity. I sobbed once as the shear beauty struck my soul and sent me into a state of reverence. And then my nose led me to her.

At the far end of the gallery, off in a little corner (‘little’ being relative), was the Venus de Milo. My parents had a miniature of her in their bedroom when I was a little girl. She fascinated me. She was so touchingly perfect. The original was nothing like it. The original is huge, wonderfully so. She seems to hover over the people below, blessedly few in number when we found her.

Luckily, the crowd wasn’t yet out of hand. 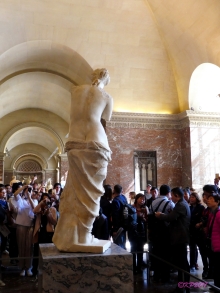 As beautiful from the back as from the front. And the crowd gathers.

A partial side view. The crowd had become untenable. 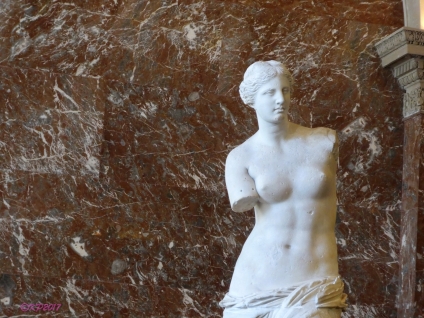 The soft gentleness in her face is lovely.

Slightly dazed, I wandered through the next room. And found the Pallas de Velletri, another art class subject. I was also something of a Greek/Roman/Egyptian deity buff from a very early age. I was surrounded by Artemis, Athena, Aphrodite, Jupiter, Mars … in a setting that lifted me out of myself. 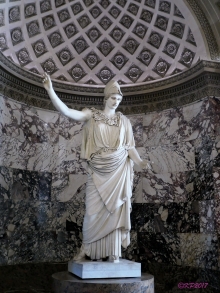 Athena always inspired me. She fought, she debated; she made me feel I could, too.

Jupiter accompagné de l’aigle – 2nd century Roman in marble. He has a gentility that most statues of Jupiter do not. I love that his eagle gazes at him, almost adoringly.

Athena Pacifique, based on a bronze from the 4th century.

And then we tried to find the Mona Lisa.

The Louvre is a rabbit warren, it truly is. I tried to follow the map, but became increasingly turned around. It was somewhat surprising as I am the navigator of the family. Fact is, we were neither of us prepared for the experience and we were both more than a little footsore. Up and down stairs, knowing we were going vaguely in the right direction only to find we had chosen the wrong stairs. To be so close to seeing this painting, and to be so frustrated in every attempt to find it was, well, frustrating. Finally, we got on the right track. 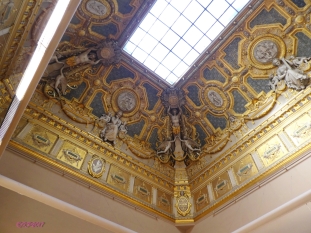 I love the look on the woman’s face who stands alone near the centre of this shot.

La Grande Gallerie, fabulous, which we passed through in search of the Mona Lisa.

I didn’t take a picture of the Mona Lisa. When we turned into the room she is in, off the Grande Gallerie, we faced a ravening hord of selfie takers. I spent fifteen minutes trying to weed my way through the throng. Many people took the selfies over and over and over, trying to get a shot of themselves with the most famous painting in the world. I was so upset I almost cried. I just wanted to see her. To understand why she is the greatest work of art ever created. To do that I needed to get to the front of the crowd.

“I just want to look at her,” I said out loud at one point. A lovely American woman just infront of me must have heard the distress in my voice. She was at the barrier with an unimpeded view.

For a few minutes, it was me and her. A photograph cannot do her justice. All you ever hear is that she’s smaller than you might expect. Doesn’t matter. The Mona Lisa is absolutely the single most beautiful work of art I have ever experienced. Her eyes followed me and her beauty filled me. I couldn’t photograph her. There was no point. It would just be another photograph of the Mona Lisa that could not possibly do her justice.

Taking a deep breath and sending thanks to Da Vinci from my heart, I wove my way through to the edge where my sweetheart stood and we began the trek to find our way out. Somehow, we came across the Daru Stairs, consstructed in the 1880s. I will never know how I missed it, but at the top of those stairs was the Winged Victory … the third of the three ladies I had wanted to see. But I was so overwhelmed and physically exhausted that all I saw were stairs taking us down to the Ground Floor.

The view of the Daru Stairs.

A glimpse of the sculptures in the Greek, Etruscan and Roman area of the Danon Wing ground floor, found at the base of the Daru stairs.

A view into the ground floor Danon With Greek, Etruscan and Roman gallery from the stairs.

At the back is a 2nd century Roman statue of an unidentified empress. The gorgeous purple marble tub infront of her had to be hers!

And so we found our way out. Somehow, we ended up in a shopping mall, but eventually some stairs took us up to the Rue du Rivoli across from the archway to Place du Carrousel.

I didn’t really see much as we left. In fact, I had decided I would never go back there. But now, I’m not so sure. Now that I understand the Louvre for the experience it is, I might go back. At opening time. When there are fewer people. And with a plan of what I want to see firmly in my mind. We only barely touched the surface of the experience the Louvre offers. And we missed Napolean’s Apartments in the Richelieu Wing. So, a la prochaine, Louvre.

Next up, the rickshaw ride of a lifetime.