As Lockdown has continued, people are getting increasingly restless. It’s understandable. Our lives have been disrupted. People have been furloughed from work, or worse, lost their jobs completely. They want to visit their friends and families. And with Mother’s Day just having occurred in North America, people were finding ways to get around social distancing to visit their moms, whilst others made do with a phone call, video call or a message of love on Facebook.

Shopping for groceries continues to be an exercise in queues and complex dances with grocery carts as partners.

Some feel the restrictions are too harsh and unfair. They talk of governments trying to control them, forcing them to wear face masks and inhibiting their freedom of movement. So, I thought I’d give a bit of perspective.

Malta is a tiny island in the middle of the Mediterranean Sea, about 60 miles off the coast of Sicily. Almost since its first inhabitants crossed the sea to get there, it has been the wartime crossroads of Europe. In the early years, the Phoenicians, the Carthaginians, the Romans and the Byzantines landed on her shores and in 60CE, St Paul was shipwrecked there as he was on his way to Rome. Malta has, literally, been Christian since the very beginning.

The Ottoman Empire took control in 873CE and to this day, their language forms the basis of Maltese. Then it was the Normans and the Aragonese, who also added to the language. In 1530, Charles V of Spain gave the island to the Sovereign Military Order of St. John of Jerusalem, for the price of one Maltese Falcon a year. They ruled until 1798 and were known as the now infamous Knights of Malta.

In 1798, Napoleon ousted the Knights in a fierce battle, whilst on his way to Egypt. He was so disrespectful to Maltese history and culture, however, that in 1800, Malta approached Great Britain for help in getting rid of him. This was the first time that the Maltese chose their overlord. In 1974, Malta became a Republic and the date in September 1979, when for the first time in her history she housed no foreign power’s military, is celebrated to this day.

However, by the time WWII began, they were well and truly British. And this is where we pick up the story.

Not only was Malta the tenuous foothold of Allied power in the Mediterranean, because of its proximity to Europe, the Middle East and Africa, during WWII the Axis powers bombed the hell out of her. We always hear about the Blitz and what it did to London in those eight months, but the bombing of Malta began on July 11, 1940, including one continuous stretch of 154 days.  Between January and July 1942, there was only one 24 hour period in which Axis bombers did not darken the skies. The last bombs were dropped on August 28, 1944, and by then there had been some 3,340 air raid alerts.

On top of that, the Axis powers bombed all shipping coming into the island, meaning food, weapons and medical supplies were not being replenished. All food was put into a central pool, and the Maltese queued at each mealtime for a bit of bread and whatever was on offer as food that day.

At first, they didn’t have proper air raid shelters, so people hid under tables and chairs in their homes during air raids, or conducted themselves as they had during the Abyssinian Crisis of the mid-1930s.

As the Italian bombardment continued, air raid shelters were dug by miners. 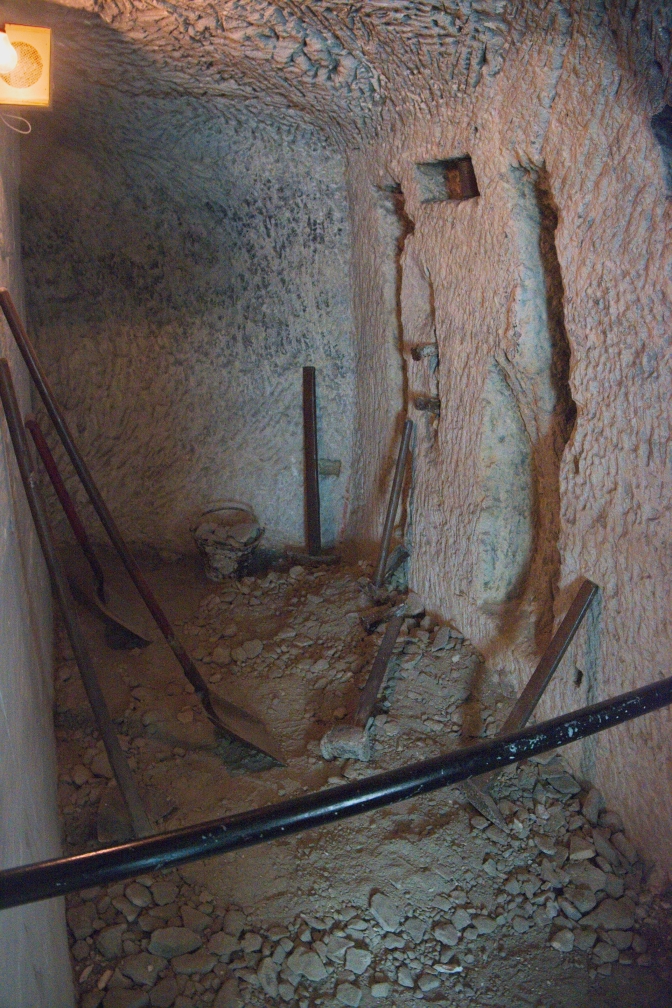 The miners only got so far before being pulled from this duty into the active war effort, but it was enough space for people to crowd in.

We visited one in the Malta At War Museum, in Birgu (English name, Vittoriosa) that was eye opening. It was constructed under an 18th century barracks and because it was situated on the Dockyards creek, on the edge of the Grand Harbour, Birgu was particularly heavily bombed. Half of the city was destroyed.

The first thing we saw were bunks set up in the corridors. 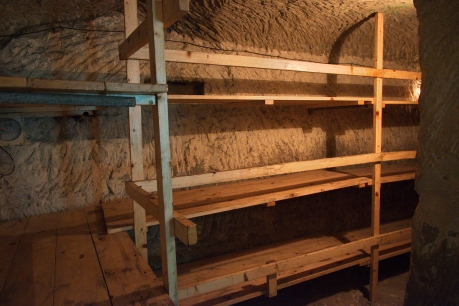 Sleeping boards in the corridor.

There was no personal space at first, but they did make sure there was a maternity room so women could give birth in private. 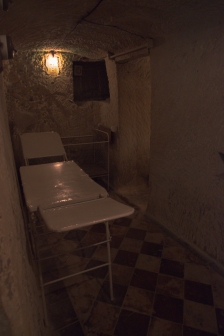 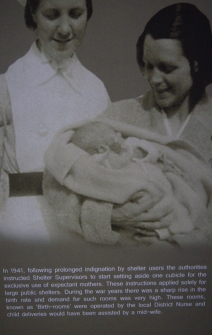 There were signs posted admonishing people to remember they were civilized and asking, for instance, that there be no spitting. Cleanliness was encouraged, but the shelters were filled with diseases like TB and dysentery. 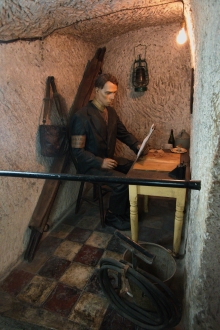 There was only one electricity generating station on the island, at Floriana, but it was bombed on a regular basis, so power was sketchy even where people sheltering had paid for wiring to be installed in their areas and often light was provided by oil lamps.

“…the air was filled with the crash of masonry and the uncanny swirl of blast. The building above was hit. Clouds of dust penetrated the shelter, smothering and half-choking the shelterers with dust, mostly women with babies and young children. Some of the children were terrified and cried, but their mothers open-eyed and stupefied, calmly dipped their handkerchiefs in a pail of water kept in the shelter for the purpose and put them over the mouths and noses of the babies. Then hugging their youngest to their bosom they muttered a silent prayer.” – Foreign Correspondent, Reuters 1942 – from the Guide Me Malta website

Finally, the government began to allow people to create their own personal spaces. If you wanted one, you could pay for it, but a 6′ by 6′ space would cost the astronomical sum of £100.00. Otherwise, you had to dig it out of the rock yourself … and that is just what the women and children did. They hewed, foot by tortuous foot, small spaces for their families. The deeper into the complex you go, the narrower the corridors become, with ceilings so low as to cause bruised heads on a regular basis. In fact, you cannot visit without wearing a construction hat to protect against head injury.

Some of the personal spaces were owned by people rich enough to install not only electrical wiring, but tiling and other comforts from home; others consisted of a bunk with pallets laid over the slatted supports and a bench, shared by the whole family.

Conditions in the shelter were dark and claustrophobic. I went down some corridors so narrow, I had to turn sideways. There was no way someone as tall as my husband would get through. He told me to go on without him, while he sat on a bench for a few minutes. As I continued through the warren, I found more and more private spaces.

There were also hospital surgeries, and areas for religious observance. Food … well, if you were lucky, you might have space to store a bit of food … if you had any.

As I continued deeper into the tunnels without him, the feeling of weight above my head closed in, and breathing became difficult; after room number 10 on the map above, I had to turn around and find him. Having to stay in there for days and nights, as bombs destroyed the city above must have been at times unbearable.

Yet, the Maltese persevered. Church services continued as did schools. Many classes occurred outdoors, as school buildings were destroyed, with the children’s desks in rows on the rocky soil. Always there was the clearing of rubble to find friends and family who had been caught out. We, today, have no way of comprehending this fully, but the people of Malta will never forget.

And I have just a tiny idea of how it must have been for them, locked down in dark, cramped conditions, wondering what would greet them when they finally were able to leave. It is no wonder that the people of Malta were granted the George Cross by King George Vi, on April 15, 1942, when the siege was still at its worst. The people were ravaged by war and starving. Supply ships were constantly sunk by Axis forces. Food resources were nearly out, there was almost no fuel and what there was, was needed by the military. Even ammunition was in short supply, meaning that there were only a few rounds available every day to try to shoot down the enemy bombers. It wasn’t until August of 1942 that a convoy of Allied ships made it to Valletta’s Grand Harbour with relief.

When I find it difficult that I cannot see my friends, or go out as I wish, that I cannot go to a film or shop without queuing, that I must wear a face mask that makes me gasp for air when I remove it and maintain distance from those around me, I remember that I have a garden, I have fresh air and food, I have relative freedom. And although I fear for them, I have contact with those I love.

The people of Malta, keeping chin up and persevering through an ordeal that I can only barely imagine are my beacon of hope that we, too, will come out of our battle with Covid-19 to move freely once more. 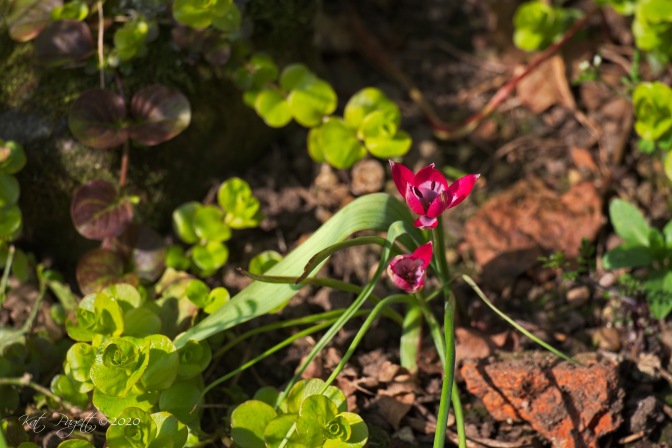