Month two in the lives of the Canadians is always fun. The down feathers begin to come out in the most wondrous ways and the Goslings become all legs. They resemble nothing short of gawky teenagers. On May 25, however, they still looked like sweet, if growing, little Goslings. My sweetheart decided to surprise them to celebrate their second month, by giving them their treat two days in a row. That went over pretty well.

There are milestones in their lives that all Goslings experience. Wing training is one of those things. The general course has been that as they got old enough to consciously utilise their wings, Papa and Mama would incite them to run and flap, whooshing in from behind, massive wings outstretched, with a loud braying honk. The resulting adrenaline rush was enough to really get the Goslings going. In this way, over a couple of months, they would build the leg and flight muscles required to help them lift off toward the end of July. The training would happen out of the blue. If I was lucky, I got a shot. If I was too slow, I didn’t.

This year, it was a little different … but then, the whole thing was different this year. This year, the Goslings would just up and go. One minute they’d be eating; the next, they’d be running, little wings outstretched. I was lucky enough to be taking my first morning photos of them on May 27, when off they went.

The warm morning sun bathes them.

And they’re off, utterly spontaneously and joyously. 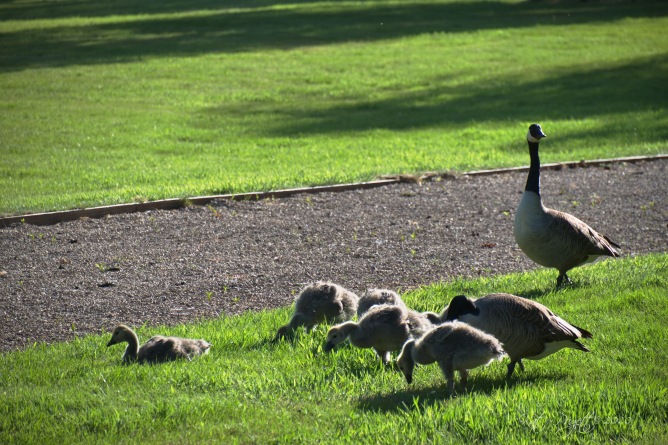 They didn’t go far that morning, but it was such fun to watch and imagine what it would be like in six weeks. Around 7:00 that evening, the family spent some time seeking leftover seed from the various feedings. Their little personalities shone, at times. Take these two: 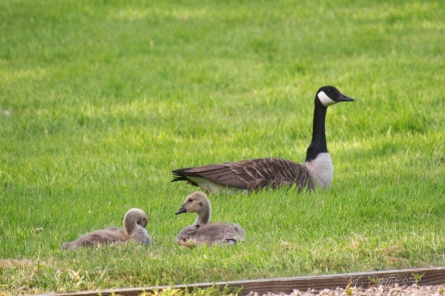 Fine. Ignore me then.

I didn’t want you sitting next to me, anyway.

Mama must have really wanted to know what she was seeing … or she was posing for the camera.

As our dinner time approached, and it would have been at this hour, I can see me, loathe to put down my camera for anything so mundane as food, sneaking ‘one last shot’ in.

Perfectly in the light, perfect perky pose .. photobombed by a wing stretch.

Just a bit further and I’ll get it!

And with a fluff of her wings, she does.

The pleasure we take in our family has grown over the years. At first, it was the familiarity of the Canada Goose. Being from Canada, we are more than familiar. With every year, however, we become more attached, take more joy. They form a large portion of our favourite memories of the last nine years.

The morning is a lazy time.

Off in the distance he sees the Mallards, having a lazy morning, too.

Just being together is all they need.

On May 30, it happened. The day I wait for each year. The day the Goslings begin their transition to Gawky Teenagers. Their legs got longer.

Suddenly, they are all leg, skinny leg, but leg.

And their efforts to eat as much as possible redouble.

At their tea time, I got a closer look.

Papa’s just so big. When he does this it makes me think of a tank!

This growing thing takes a lot of energy!

Papa pauses for his photo op.

He stands there so solidly staring at that one spot. Check out the down tufting on the Gosling in behind.

He’s absolutely intent on what he is doing.

And then there’s the Movie Star, Miss Perfection.

And then it was the last day of their fifth week. So, to celebrate, the inevitable happened. 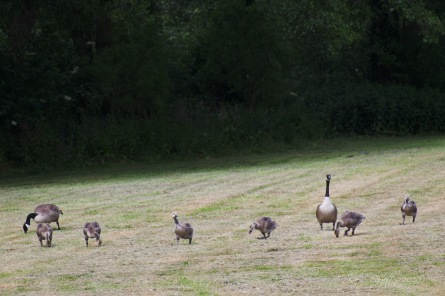 Is there anything good?

He hears something. Wishful hearing, perhaps?

Ten minutes later, the sun came out. “Hello, Family!” he called. That’s all it took.

The race is on!

Who will get there first! 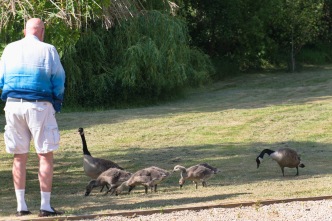 “Where’s mine?” Papa seems to say. 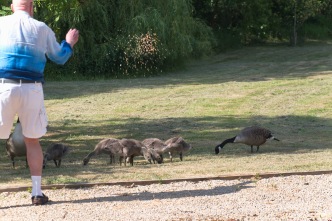 As the ravening hordes demolish seed, quietly in behind, Mama politely tucks in, too.

It was nine years ago, yesterday, that I landed at Heathrow with our girl, to be met by my sweetheart, rose between his teeth, and start a new life. What a time we’ve had; what a journey. What an adventure. 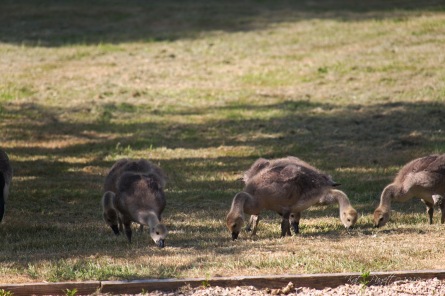 Always together, plus one.

Almost an hour later, they are still there.

While we’ve been building life, living highs and lows, experiencing illness and good health, both, this family has been our constant. We celebrate each year’s Goslings and mourn with Mama and Papa when one or (sadly) more go missing. This year of lockdown and upheaval was no different. Nature goes on. Nature thrives. And we are grateful for that.